I bought the Suzuki DR650 in 1996 when I was living in Atlanta to have a reliable alternative to a Volvo wagon when the Olympics hit the city that summer. And also for weekend adventures in the mountains.

The DR was a good choice and it's never left me, even if for some time I left it.

After leaving it abandoned in our garage since 2009 it was time for a DR resurrection, and though my initial impulse was to simply do a safety rebuild (rubber, hoses, fuel system clean and brake rebuilds)... it got out of control.

The 24 years since I bought the DR have been good to us, and I was fortunate to be able to let the product designer out of my brain for a little fun. As it moved along the goal changed from simply getting it running... to making my DR into a different thing... More like the Suzuki 125cc enduro I learned to ride in the early 1970s... with a retro look but with Cogent suspension, a functional seat, improved performance, and places to attach bags for trips. There are many hipster scramblers out there, but this one would be built for the real-world with mirrors, a rear fender, and actual suspension travel.

Disclaimer:
Motorcycles can travel at high speeds, mechanical issues can cause accidents, riders don't have much protection. Be careful! Follow all the suggestions of folks who are wiser than me and don't even think about working on your moto if you don't know what you are attempting. Be responsible and don't sue me, OK?

These pages are still works in progress, but here's how the info is distributed

Moto-Resto DR650
This page! Quick introduction, more later as I get the other pages under control
Moto-Resto FAQ
Frequently Asked Questions
DR650 Resto Checklist
Summary of all the work and changes
Favorite Moto Tools
Things I could not live without from the project
Moto Farkle Remorse
'Farkle' is a DRRiders term for things you try out but don't work out
Big Moto-Resto Gallery
Where most of the work is going - more than 200 pictures so far
Original DR650 page
Wrote this in 1997 - I was UX architect for an internet startup and wrote it in HTML3, code is slightly updated but this is a historical document.
Early DR650 Experiences
The companion follow-up page to above from 1999...

Purchase, learning to ride, MSF training, initial web page... work commuting, plus trips to Blue Ridge Parkway, exploring the state, and bombing down some gravel roads. The initial round of changes... IMS white tank, sticker delete, black seat cover, big round headlight, RMZ rear light, 19-inch front wheel... more daily commuting in Atlanta. Loved the change in handling from the smaller front wheel - much more flickable in corners if you move your center-of-gravity forward a couple of inches. Somewhere in this period I had an adventure with a rusted starter (outdoor parking - rain pools under the starter/motor interface)... and a scary sudden silence at 70 MPH when I broke a timing chain.

Moved from Charlotte to Raleigh NC (about 2.5 hours driving, but I trailered the DR)... commuting around the Triangle becomes less frequent with house renovation projects and sometime in 2009... was the last run on the DR.

Why did I stop riding the DR? It did not help that North Carolina started requiring motorcycle inspections to renew motorcycle tags, while licensing very few stations to perform the simple safety inspection (tires, brakes, lights, horn > this is still an issue). But the main reason was that I started riding my bicycle much more for commuting and health. Riding the DR competed for the same weather and timing, and it lost.

At Thanksgiving holiday in NY, my brother-in-law, who I really think of as a friend and kindred thinker, has been riding 2019 Triumph Bonneville around CT and NY as active meditation - bringing back many memories of time on the DR. Return home with the notion to get the DR cleaned up and running again...

December - started tearing down the DR650 motorcycle that's been sitting unridden in the garage. They don't get better if they are ignored! Restoring my dead 1996 Suzuki 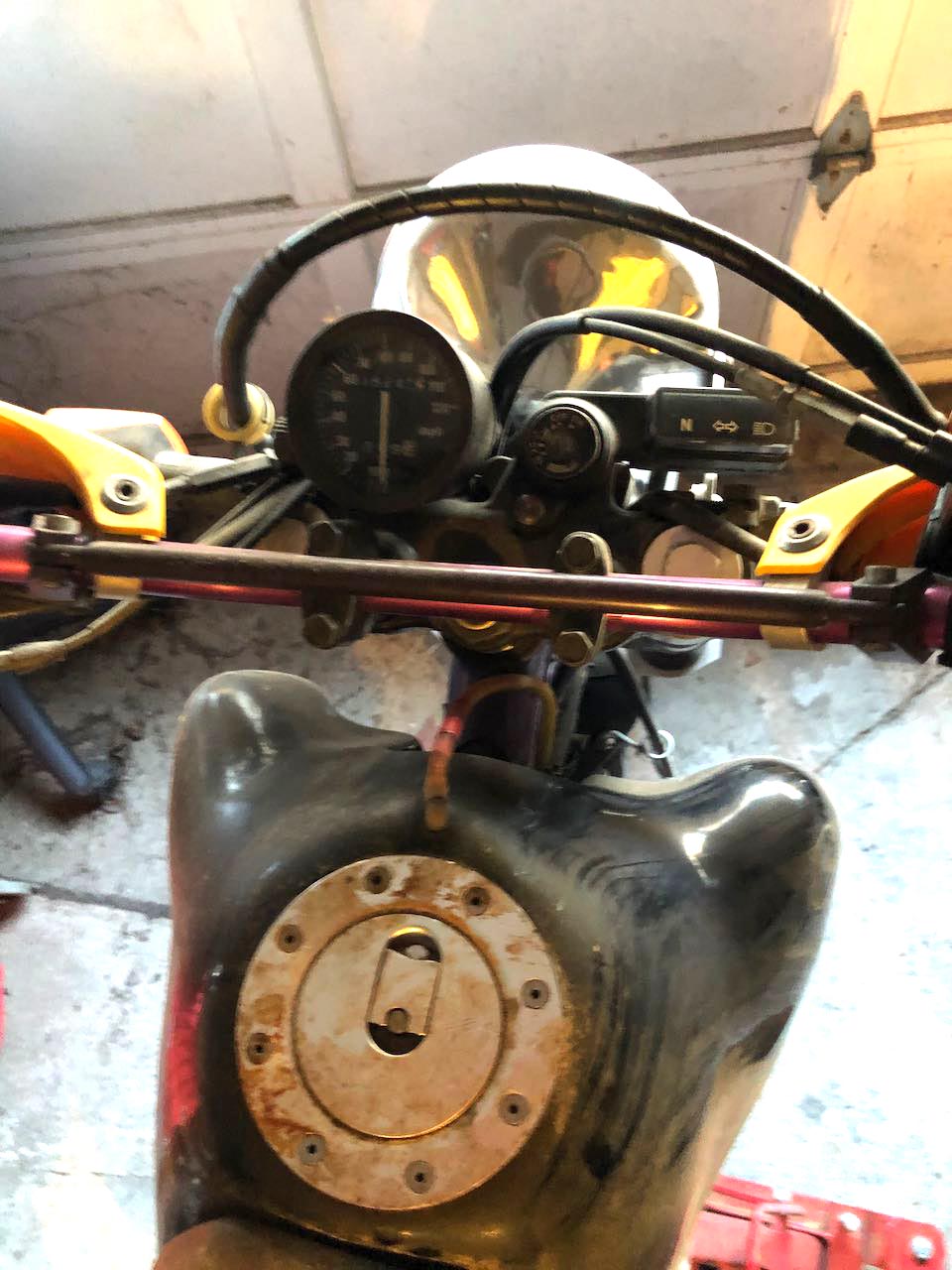 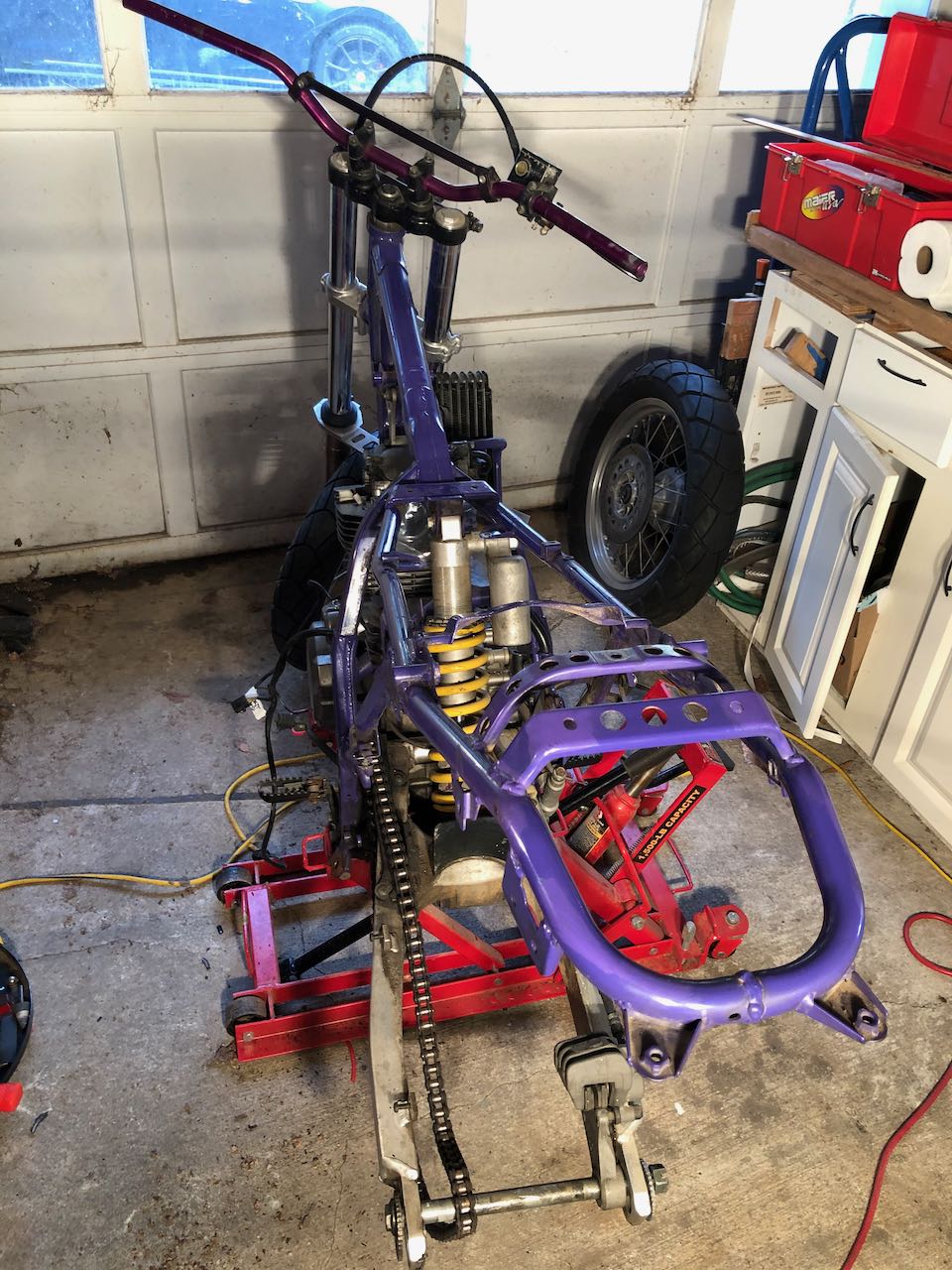 Restoring my dead 1996 Suzuki. Stripped it down to the frame, cleaning parts as I went. Dropped cash on replacement parts where needed. Trimmed all the extra mounts and tabs from the frame to convert the DR into a modern hipster-scrambler... 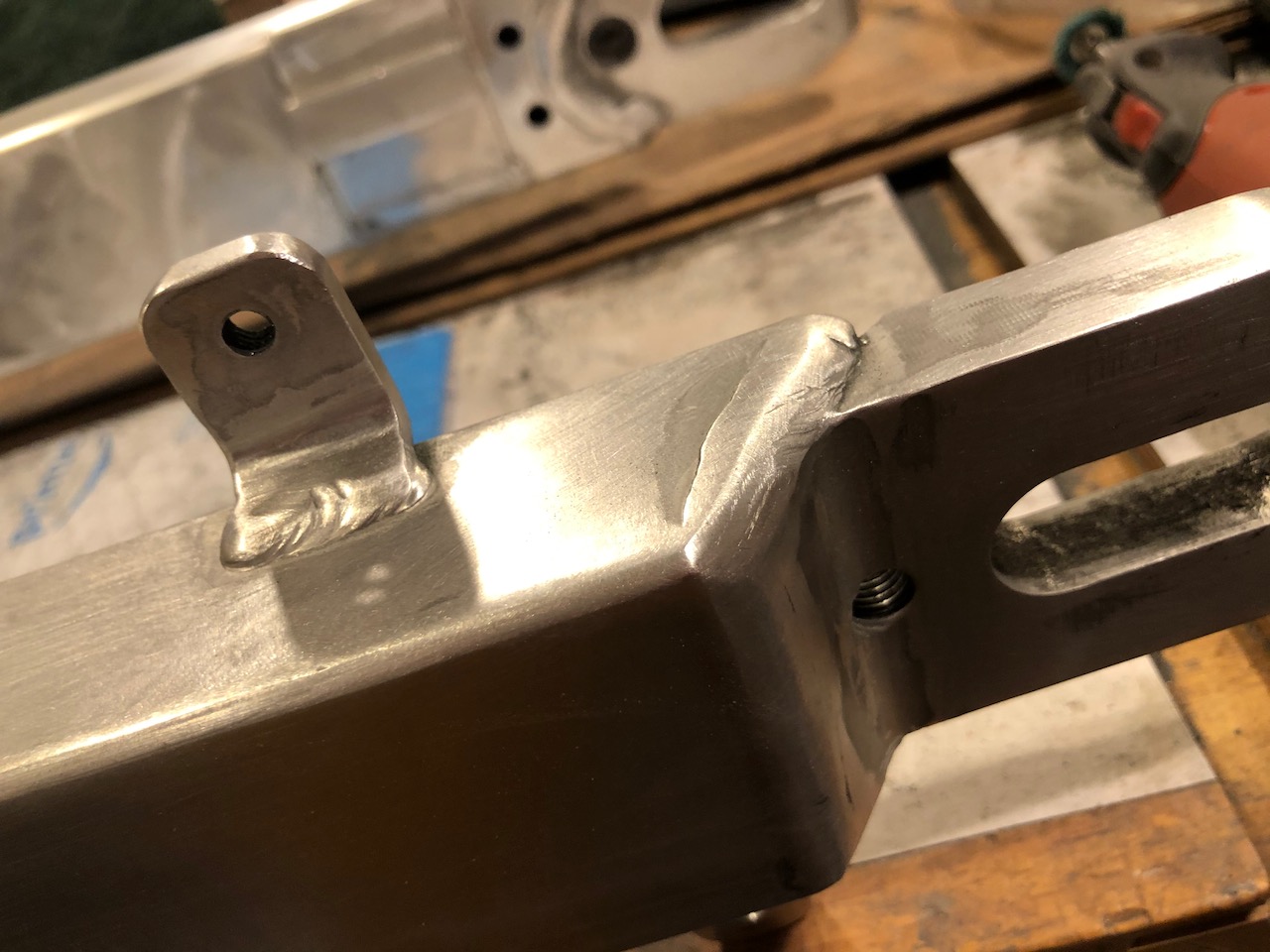 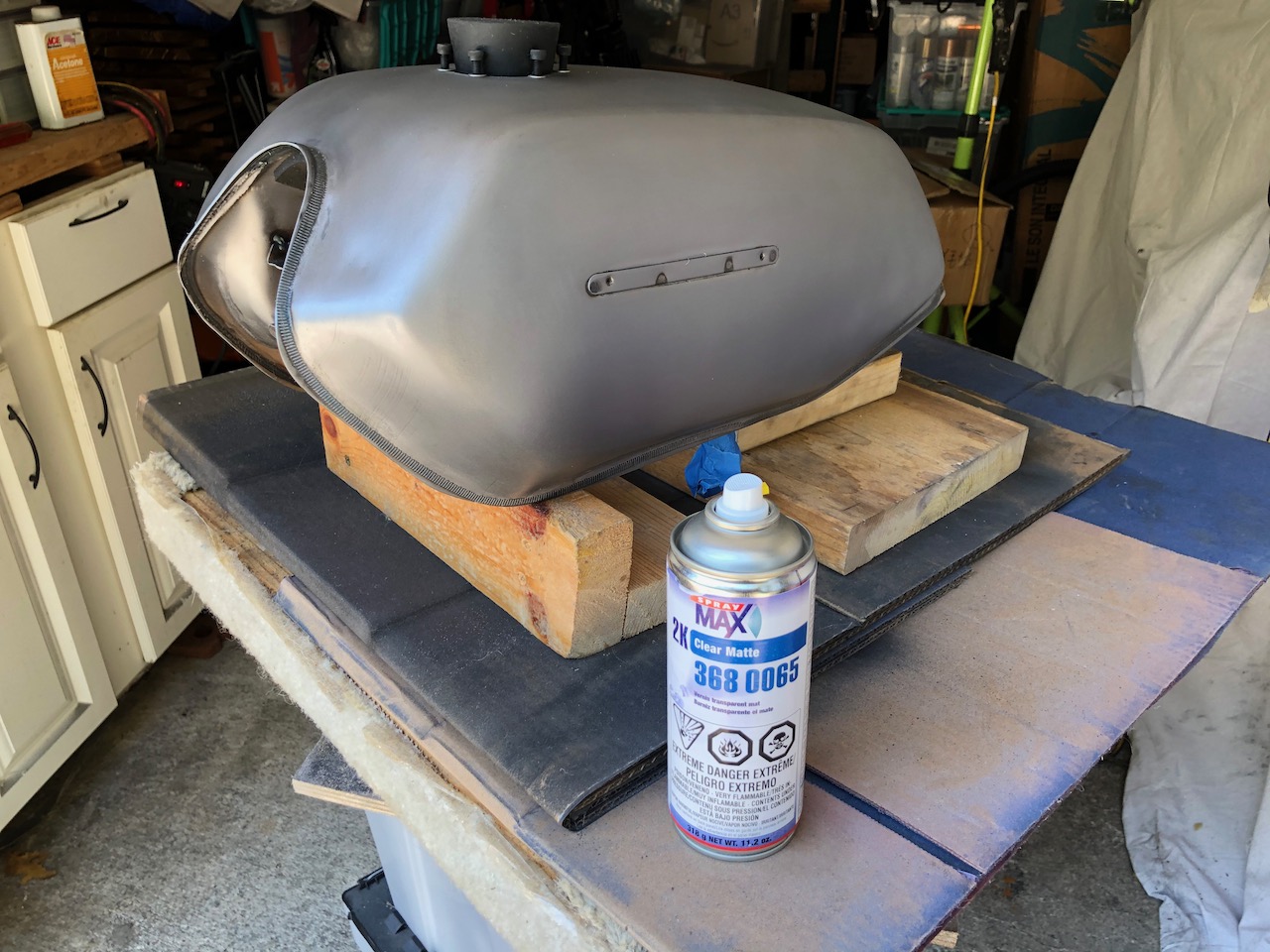 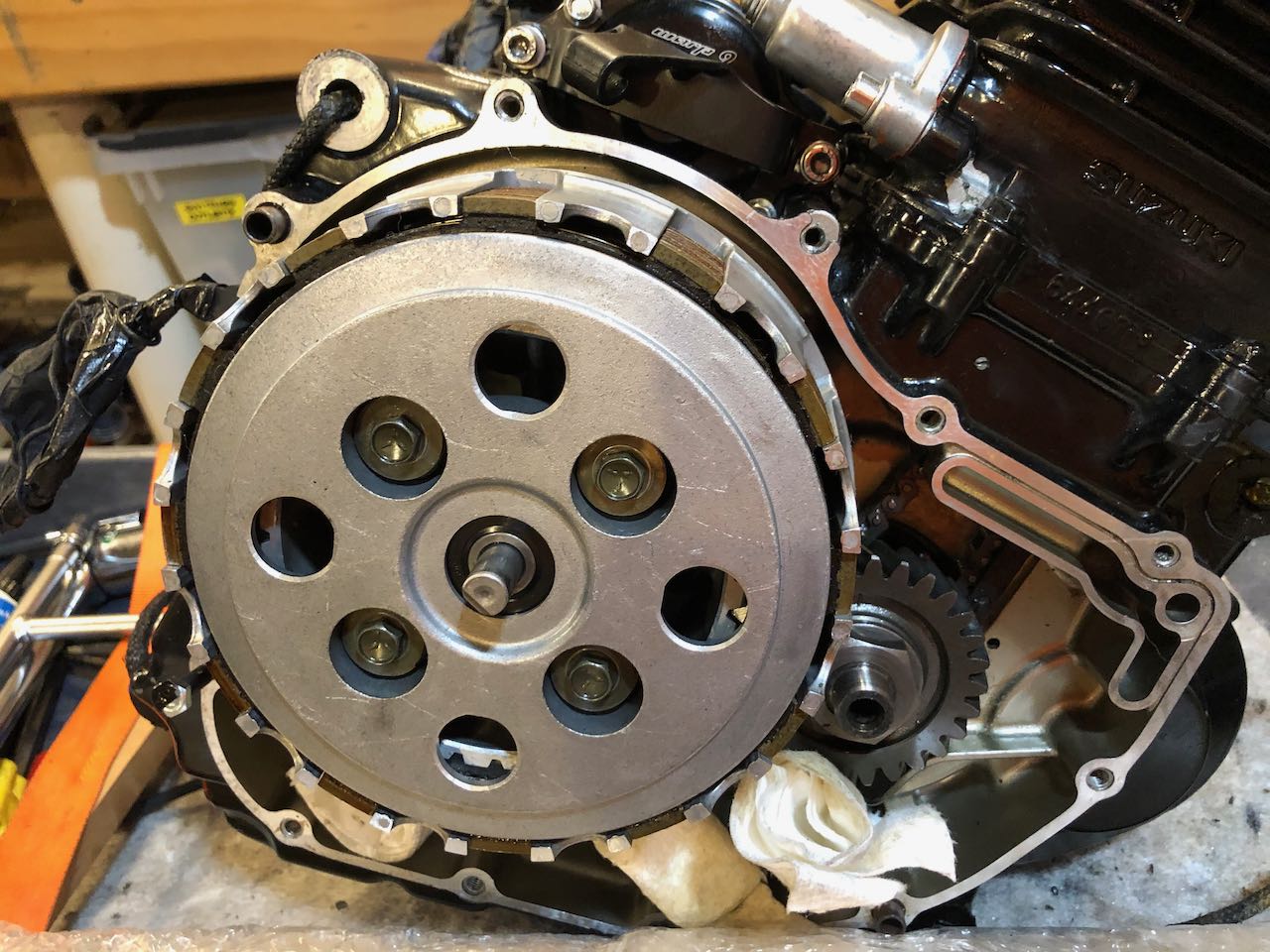 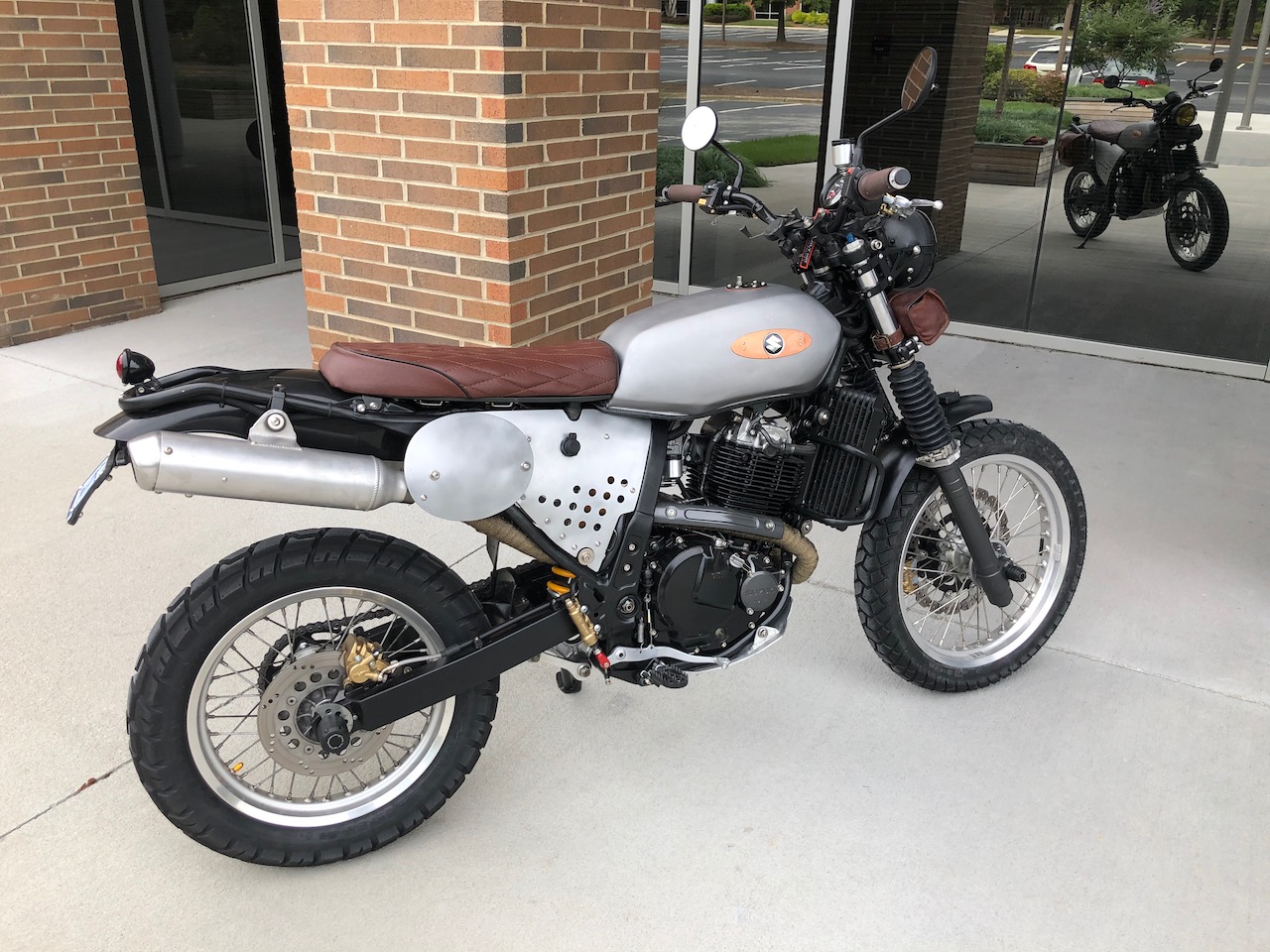 What did you do to your dual-sport this week?↗

[ There is an inevitable moment where you're tangling with an electrical gremlin - The DR is very simple: one cylinder, one carburetor, simple ignition control, big electric starter... Here's a real-world example of solving an issue that turned out to be a bad engine ground. ]

Whelp... suited up on Friday morning to go for a ride, rolled the bike out of the garage, and it would not start.
Click... Click...

Rolled the bike back into the garage.

Started trouble-shooting. I had a new starter relay I ordered previously so I swapped that in (since it was easy to get to without stripping off the side panels)... while I was swapping I cleaned the cable connections (again) and applied a thin coat of dialectric grease. Yeah, I know, some controversy with dialectric grease on terminals. I've been designing and building tube amplifiers for years now, and good connections are vital. But galvanic corrosion is real too, and all too likely with outdoor connections, so I'm firmly in the dialectric grease camp. Anyway, now I had a much louder Click... Click...

OK, let's start with the worst case - the perversity of the universe tends towards the maximum - and tackle the (new) starter. Remove the battery to prevent electrical mischief. Remove the exhaust header, remove the cam tensioner, disconnect and move the clutch cable out of the way, remove the front banjo bolt on the "Y" oil line, and unbolt the starter... everything looks good, but I still have the old (works, but screamed a bit) Y2K starter so I open it up to compare and notice the thrust washer with tabs inside the motor end cap is missing on the new starter, so I clean and lube it and move it to the new one. Reassemble. Upgrade the connection nuts to flanged stainless M6 nuts with serrations.

I liked an idea from ProCycle in one of the starting debug posts about moving the motor ground location to the starter, so I sanded off the anodizing from the Warp9 starter end cap, and cleaned the motor bosses and the clutch cable bracket. Also ran an M6 tap through the motor boss, because, why not? (quick tip - a small 12-point socket can fit the square head on a tap if you need to reach a deep hole) Cleaned out the area under the starter with a vacuum cleaner and wiped down the seal area. Inserted the starter. Removed the ground cable from above the countershaft seal and cleaned it, then bolted it to the rear starter mount with stainless serrated washers on both sides of the clutch bracket with more dielectric grease. Reinstalled the (+) cable for the starter motor, the cam chain tensioner, and the front oil banjo bolt with fresh copper crush washers.

Made a 16 gauge jumper for the clutch switch connection and installed it in the headlight.

Still have the header off, but let's try the starter now. Hook up the battery again, ignition on, neutral, run switch on, push the starter button... Starter turns happily. Yippee! Reassemble, checking the starter again after each step! Roll it out and start the engine, let it run for 5+ minutes... restart the bike two more times. Yep, starting strong and fast now.

Yesterday, I finally got my ride in - and the bike is running great.

Then, after 50+ miles around the area the front tire started to get low... I stopped to air it up but the valve core (new Bridgestone tube) looked weird, rode home and could feel it getting more squirrely as I rode. Shortened story - inspected new Shinko tire looks good, but the stem on that new tube is buggered. It held air fine for a while, but I'm guessing some of the bumps riding around the rutted gravel parking areas at the college stadium may have loosened the core. (but the Cogent suspension mods are excellent!) Time to pull off the wheel and install a replacement this week. Have I saturated the bug curve yet?